“Blessed are the pure in heart, they will see god”

Erected to the memory of Martha Shannon, 12 April, 1917. Grandmother to Dr. L.L. Davey, wife of David Shannon of Yatara, a sheep raising property at Stockwell near Kapunda.

“Thine eyes shall see the king in his beauty!”

“Once again you will see a King ruling in splendour over a land that stretches in all directions.”

Erected to the memory of R. & E. Lathlean and Lydia, August 1911. Wesley Richard Lathlean and his wife Elizabeth and her sister Lydia Brinsden. Members of the Kent Town congregation.

“Ruth answered, ‘Don’t ask me to leave you! Let me go with you. Wherever you go, I will go; wherever you live, I will live. Your people will be my people and your God will be my God. Wherever you die, I will die, and that is where I will be buried. May the Lord’s worst punishment come upon me if I let anything but death separate me from you!”

Erected to the memory of E. Ada Davey, 26 April, 1916. The widow of Thomas Henry Davey. A trustee of the Church and uncle of Dr. L.L. Davey.

4. A woman with children – PROVERBS 31:28 “Her children show their appreciation, and her husband praises her.” Inscription: Her children shall rise up and call her blessed.

Erected to the memory of Mercy Jeffries, 25 February, 1903. The wife of Rev. William Jeffries, Minister.

“Jesus said: ‘Let the children come to me and do not stop them, because the Kingdom of God belongs to such as these’”

Erected to the memory of Elizabeth Gartrell who died 1 August, 1895. Erected by her son J.G.

“Jesus said; ‘Let the children come to me and do not stop them, because the Kingdom of God belongs to such as these.'” 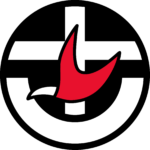